International PEN is outraged by the charges brought against Liu Xiaobo 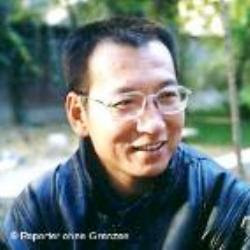 From a poem by Liu Xiaobo.

International PEN, the world association of writers, is outraged by the charges of ‘incitement to subversion of state power' brought against prominent dissident writer Liu Xiaobo, former President and Board member of Independent Chinese PEN Centre, on 23 June 2009. Liu Xiaobo was arrested on 8 December 2008 for his role in publishing Charter 08, a document calling for political reform and human rights. Many other signatories of the Charter have been harassed or briefly detained, and there are growing concerns about reports that other members of Independent Chinese PEN Centre based in the P.R.China have been under increased pressure in recent days.

According to PEN’s information, police from the Beijing Public Security Bureau (PSB) National Security Unit delivered Liu Xiaobo's formal arrest notice dated June 23 to his wife, Liu Xia, on 24 June 2009. According to the official Xinhua news agency, he is accused of ‘spreading rumours and defaming the government, aimed at subversion of the state and overthrowing the socialism system in recent years'. The charge carries a maximum five-year prison sentence, and is believed to be based on his endorsement of Charter 08 and over twenty articles published between 2001-2008. He is said to have confessed to the charges against him.

After his arrest on 8 December 2008, Liu Xiaobo was held under ‘residential surveillance', a form of pre-trial detention, at an undisclosed location in Beijing, without access to his lawyer. He was allowed only two family visits throughout his six-month detention, in January and in March, and was held in a windowless room without any outdoor time. His lawyer Mo Shaoping has been barred from representing Liu due to his endorsement of Charter 08, therefore two other members of Mo’s law firm have been nominated to represent him. Liu Xiaobo was reportedly transferred to the Public Security Bureau (PSB) Detention Centre in Douge Zhuang, Beijing, on 23 June 2009, where he reports “an improvement” in his conditions since he now has regular outdoor time and five detainees in his cell with whom he can talk. He was allowed to meet with his lawyers on 26 June 2009.

Liu Xiaobo is among a large number of dissidents to have been detained or harassed since December 2008 after issuing an open letter calling on the National People's Congress Standing Committee to ratify the International Covenant of Civil and Political Rights (ICCPR), and launching Charter 08, a declaration calling for political reforms and human rights published on 9 December 2008. These activities were part of campaigns to commemorate the 60th Anniversary of the Universal Declaration of Human Rights (10 December), and were initially signed by over 300 scholars, journalists, freelance writers and activists and now have over 8000 signatories from throughout China.

Liu Xiaobo first received support from PEN 20 years ago, when, in 1989, he was one of a group of writers and intellectuals given the label the “Black Hands of Beijing” by the government, and arrested for their part in the Tiananmen Square protests. Liu has since spent a total of five years in prison, including a three year sentence passed in 1996, and he has suffered frequent short arrests, harassment and censorship. He is among over forty writers detained today in the People's Republic of China for the peaceful expression of their opinions. International PEN demands the immediate and unconditional release of dissident writer Liu Xiaobo and all those detained in China for the peaceful exercise of their opinions, in accordance with Article 19 of the International Covenant on Civil and Political Rights, to which China is a signatory.

On behalf of the Board of International PEN

Posted by Respectable at 4:48 PM