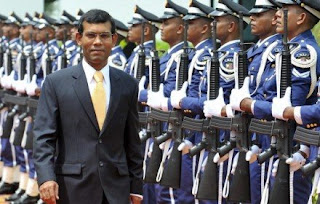 In Dharubaaruge, the great hall of the presidential palace in Malé, capital of the Maldives, Jonathan Heawood, director of English PEN, and I await the arrival of the president-designate, Mohamed Nasheed. It is the first day of the new democratic government that swept to power in the recent elections and brought to an end 30 years of despotic and corrupt misrule by the previous president, Maumoon Abdul Gayoom.

It is also a startling day for PEN, the international fellowship of writers, which campaigned for the release of Nasheed, formerly a dissident journalist and opposition activist who had been in and out of prison ever since 1991, when he was arrested for an article in the popular political magazine Sangu and detained for two years. Freed in June 1993, he was rearrested in 1994 and 1995, sentenced to a further two years in 1996 and finally banished from the Maldives in 2003. Returning from exile in 2005, "Anni", as he is popularly known, formed the Maldivian Democratic Party and managed to pressurise Gayoom to introduce the democratic reforms that led to the recent election.

At the reception after his inauguration, people press towards Nasheed as he shakes outstretched hands. "It's a political fairy tale," says his adviser James McGrath, a strategist who previously ran Boris Johnson's campaign for London mayor. "From prison to president, who could believe it?"

"He should be called the father of democracy here," adds Aslam Shakir, another campaign aide. But there are hints of trouble. Shakir glances across at Adam Zahir, the chief of police, a thickset man who allegedly tortured Nasheed, but is now helping himself to the buffet. "Even he has been invited - even people who brutalise people."

I ask the new president if we can see Abdullah Saeed, a writer for an opposition paper detained on the island jail of Maafushi. He nods soberly. "You will visit the prison tomorrow."

Under the former regime, drug charges proved a convenient way to silence journalists. When Saeed is brought out, limping and leaning on his stick, the price he has paid for speaking out against Gayoom is horribly clear. A prominent TV personality and investigative journalist, Saeed was arrested in October 2005. Now he is a broken figure who wakes every night, screaming. He is 44 but looks 60. One leg shakes, the result of an accident when he fell after being released from a year's solitary confinement in a tiny cell that left him unable to walk.

The police planted more than a gram of heroin on him and the mandatory sentence for possession is 25 years. In April 2006 he was sentenced to life. His appeal to the high court was never heard. Although Saeed is brought out to meet us in a relatively spacious dormitory, we learn that he was only released from his cell a few days before. "I am sad," he whispers. "I have no hope."

On 30 November, Abdullah Saeed was finally released. "I've waited a long time, gone through a lot of torture," he said after receiving the high court's verdict that his case was non-proven. "I am finding it hard to believe that I am free now."

Nasheed had pledged to make penal reform a priority and promised that political prisoners would have their cases heard within 100 days. He has kept his word. But only a day after his inauguration, there was a demonstration outside parliament calling for his resignation. The pressure cooker that is Malé is still simmering, and could explode within months.

Written by Carole Seymour-Jones, Chair of the Writers in Prison Committee.

To view the original article, published in the New Statesman on 11 December 2008, please click here