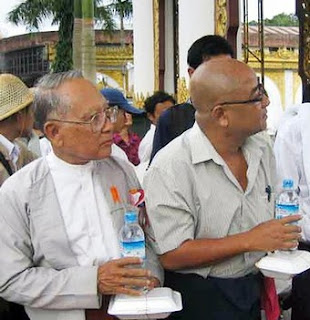 25 November 2008
International PEN is stunned by the forty-five year prison sentence handed down on 21 November 2008 to poet and comedian Zargana in Burma. One of Burma's most courageous defenders of the right to speak out against tyranny, Zargana is among a number of leading dissidents to have been sentenced in recent days in special courts held inside the notorious Insein prison for their peaceful opposition activities, many to staggeringly harsh sentences. He still faces further charges, and it is feared that more years could be added to his sentence in the next hearing scheduled for 27 November.
Zargana has long been a scourge to the Burmese government, and spent several years in prison in the early 1990s for his support for Aung San Suu Kyi's National League for Democracy. In 1988 he was briefly imprisoned for six months, and during that time produced some of the most outstanding poetry to come of political prisons in recent years. One of these defiant verses proclaimed:
With row upon row of iron bars

They can cage me.

With the heat of seven suns

They can roast me.

With a battalion of ogres

They can guard me.
But if I took my scarlet blood

And sprayed it all across the sky

The bars would melt

Their suns kowtow before me.

Posted by Respectable at 3:48 AM